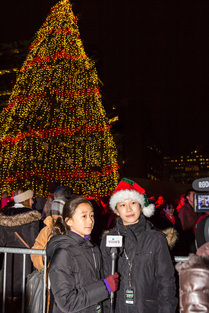 The lights, the music, and the magic─everything is on fire when you’re at the Cavalcade of Lights! From carols to dancing, instruments to fireworks, there’s absolutely nothing you won’t enjoy at this incredible event. On Saturday, November 29, 2014, the 48th year of this festival took place at the Nathan Phillips Square in Toronto to celebrate Christmas.

Before the show, we interviewed the Programming Supervisor at Toronto Cultural Events, Kerri McDonald. She says that the most challenging part of her job is last minute changes.

“We’ve been trained to just roll with that, to just go like, ‘Oh well, too bad, so sad’ and let’s get on with Plan B.” McDonald says.

McDonald and her team began preparing for this event in February, and have been working hard on it since, especially in the summer and fall. The 60 foot tall Christmas tree also took a long time to set up, so that it could wow the audience with its 12,000 bright lights.

This year’s Cavalcade of Lights was different from last year’s. McDonald and the staff decided that they wanted a “hip-hop Christmas.”

“We just thought it would be fun to do something a little different, a little edgier,” she says.

At approximately 7 o’clock, it was the moment that everyone was waiting for! The show had finally started and thousands of people gathered around to watch the performance come to life. Everyone was jittery with excitement.

The Drumline started off the show with some superb drumming! Next, the a cappella group Retrocity sang some Christmas carols. A cappella is singing without any instruments, using only voices to create music.

5, 4, 3, 2, 1! Finally, the enormous Christmas tree was lit up! This was the official lighting of Toronto’s Christmas tree. Thousands of lights shone brightly on the tall tree. Never had we ever heard such loud and enthusiastic cheering. The beautiful decoration, the shining lights, it was absolutely amazing. The massive tree made everyone speechless. We could really tell that the staff put a lot of work and effort into it.

After the lighting of the tree, there were performances by various hip hop artists and dancing by the Collective Elite Dancers. The show featured Kardinal Offishall, Kellylee Evans, and Maestro Fresh Wes singing some Christmas songs with a twist of hip hop.

At around 8:20 pm, the fireworks went off. It was a brilliant display of colorful fireworks. There was even fire coming from the top of a building! The audience was awed by this spectacular. There was an explosion of many fireworks, all at once; the magic really caught everyone’s attention. In our opinion, the fireworks were one of the best parts of the entire show!

To finish off the show, the Cavalcade of Lights featured Shad, an up and coming hip hop artist.

This event was truly outstanding! It’s impossible to describe in words how exciting this experience was. It was a pleasure to be able to come, and we are definitely returning next year.

Hi! My name is Sarah, and I'm 12 years old. I am currently in grade 7, and go to Erin Center Middle School. My favourite colour is yellow, which I think is a very unique colour, because not many people choose it as their favourite. During my free time, I like to read, draw, play video games, hang out with my friends, and write my own little short stories. My favourite sports are badminton and volleyball. I have a 3 year old cat named Lily, and if you've seen her, your heart will melt! I honestly can say, I am very proud of my amazing talent: the piano. I've won multiple awards in many different competitions. In the nationals for piano, I've won 3rd for 2 years in a row, and last year, I won 5th! I've even been to some international competitions, though I don't actually win much outside of the country! Anyways, that's really all you need to know about me so... BYE!

​Hi, my name is Katie Wang and I am 12 years old. I was born in Scarborough, Toronto on January 7th 2003. I currently attend Tomken Road Middle School. I love to play soccer, build Lego, and do anything related to art. My favourite colour is orange and some of my favourite foods are noodles, lasagna, pizza, and oranges. I really enjoy writing (like writing essays and stuff not actually the action) and journalism and that is why I joined Voice K. And… that’s all you need to know about me! :D